Get information about how to win invade? Discover grow empire Rome wall upgrades and attack tips for Android and iOS platforms.

These Grow Empire Rome tips and guide on ModAPKTips will help you choose the best training to start playing, so this application guide will help you to play well.

It is the best strategy game for Android and iOS devices. It is developed by Games Station. More than 10,000,000 people install this game in their Android platforms.

Do not mind pausing:

Note that in this game, although you need an Internet connection, you do not have multiplayer, and this gives you an advantage because it allows you to pause the game. Why not take advantage of it?

At first, the thing goes easy, but then it gets complicated. Too many units, too many buttons to press, it is easy to make mistakes. Press the pause button and analyze what happens to take the most appropriate action and do not forget anything.

USE YOUR GOLD TO IMPROVE ROME, CONQUER AND STRENGTHEN YOUR DEFENSE AGAINST THE BARBARIANS

Upgrade your heroes beyond the wall:

If you select your units from outside the walls you will see how you can have heroes like Arcani or the Barbarian Commander. In addition to being formidable units, with a lot of attacks, defense and life, they provide unique characteristics.

Use the experience points well:

This is one of the best points in grow empire Rome tips. When surpassing waves you gain experience that serves to you to level up in Grow Empire: Rome. In turn, you are awarded experience points to invest in your general.

Go there to general and study your options, the benefit that each one gives you and the cost that it has. For example, you can increase the damage your archers cause, that of your catapults, or extra damage for all for a limited time … etc

Learn the strengths and weaknesses of each type of troop:

You have units with points of life, attack, and defense. When someone attacks, the defender’s defense is subtracted from him and he knows the points of life that they take away from him. Logically, the more you have the better, the more you will endure. Also, you should know that the units are improving as you use gold in them. In other words, you unlock them. By grow empire rome tips, you can explore the weakness of all troops. 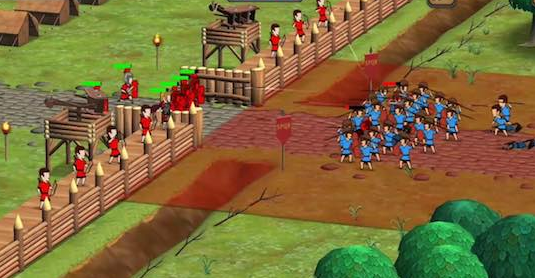 In general, what you should promote is the improvements in your units and weapons against soldiers, not against siege machinery or elephants, but here you will learn to fight against everything. For the moment, let’s assume that you face normal soldiers. So just read grow empire rome tips for combat.

Improve the strength of your archers:

You must go to upgrades and where you put Archers + Damage you can click and spend gold to level up. This will be useful to fight against any enemy on modapktips.

Improve your small arrows in the towers:

Then you must also improve the arrows of each tower, and in particular the small arrows that are effective against soldiers (the big ones against siege weapons and elephants).

Use the small stones and improve them in the catapults:

In the Grow Empire catapults: Rome you should also improve the small stones or small boulders that are more effective against soldiers. In case the threat is of elephants or siege weapons you will already know what to do, use the big ones.

Reduce time for towers and catapults:

These grow empire Rome tips: Another aspect to improve the towers is the cooling time of the towers and catapults, that is, the cooldown, so they attack faster. This is done in improvements and will be useful against any enemy that comes.

The improvement of your soldiers is also key in Grow Empire: Rome. You will know the technological tree by clicking on Units. Obviously, each type has its advantages and disadvantages. You can upgrade your soldiers by grow empire Rome tips & It is something that you must explore yourself about which are more convenient.

In general, it is convenient to diversify a little to reduce your weaknesses instead of becoming very strong in one type and weak in several.

To the left of everything is General, which serves to further boost your units through leadership skills. Not only you must improve it, but you must learn how to use it well. Depending on the enemy you face, you must use general or other skills.

So, study your enemy is the best thing you do in the game. So just read Grow Empire Rome tips and tricks to study your enemy. Finally to really be a crack in combat you should also look at how the waves are, see what kind of troops come and learn which are the most effective against them.

For example, against the cavalry the lancers go well, the swordsmen do not have weaknesses in front of another type of unit but they do not have an attack bonus against any other. That is, they are mediocre but they are off-road. 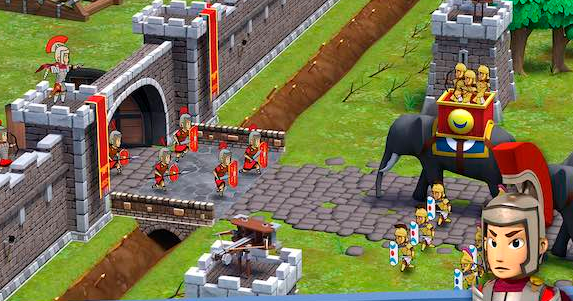 The basic guide of Grow Empire: Rome is useful to learn to play the most basic of everything, that is, to look at the options that exist, the interface, what is the purpose of each thing.

The interface of the city:

If you have nothing selected, you can see your city, scroll through it to see your buildings and troops.

You can also see up-to-date status parameters like your life points and current level, the wavenumber you are in, your gold stored (g of gold) or your current gain in Grow Empire Rome Tips.

On the right, you will see the improvements (upgrades), where there are 4 categories: the wall points, the damage of the archers (Damage archer) and the cooling times of towers (tower cooldown) and catapults (catapults cooldown).

Below you have 4 buttons: for the general, units, the map and to attack.

DO NOT DESPAIR, THAT ROME WAS NOT BUILT IN A DAY

You can also select the units of your base, such as heroes or towers and thus improve each troop separately.

In battle the interface of  Grow Empire: Rome is different. At the top right you have the play, fast forward and pause buttons.

Up to the center, you will see a bar and some icons related to the wave that is coming and the types of troop they bring.

At the bottom are your controls to select troops, crossbows, and catapults or use the general’s ability. You should operate them frequently, almost as soon as you can, except that at a given moment there are hardly any enemies, which should be reserved.

You start with a fence that protects a villa. The doors open and soldiers come out, while others remain to defend the doors. This is because a wave arrives and it’s time to defend from inside and outside. It was easy.

Now we will improve it with a pit and a palisade, towers, catapults, recruiting fields … It seems that there is infinite pasta and you can put all the improvements, also in the technological tree of the soldiers of  Grow Empire Rome Tips, which apparently in infantry can become praetorians.

Weapons can also be improved, general points … etc, and much more!

This is the trailer of  Grow Empire: Rome, an unofficial trailer where it will focus on another aspect of the game not yet mentioned as are the invasions. If you go to the map you can try to invade areas and get the colonies.

The first thing is to recruit a hero and quality melee soldiers. For a second legion, you can select other heroes and cavalry. In the third legion, he puts the siege. Once you have a colony you can improve it, which will give you more coins per minute.

What did you think of this? Our tips gives a lot of itself, you will not regret trying it.