Get 100% legit Warlords of Aternum tips and hints for Android/iPhone.

Warlords of Aternum is a multiplayer strategy game where you must grow your army and command your troops with astuteness and intelligence to overcome all the levels and challenges you can. Unlike other popular conquest games for mobile devices, which revolve around increasing the number of troops and marching them to battles that are automatically resolved by a computer, Warlords of Aternum consists of different levels and scenarios where you will face against a certain number of units, which you must dispatch efficiently. In this sense, it is not enough just to accumulate large numbers of units and send them to fight; You must also take into account many elements of the battlefield, as well as the weaknesses of each type of troop. 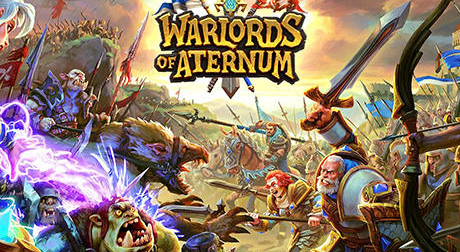 In this sense, there are many elements that you should be aware of in this game. Also, there are many units to unlock, which opens the way for players to adopt different strategies and styles of games. For this reason, there is not really a correct way to play this game, at least as far as team composition is concerned. In the same way, there are many types of equipment and elements that, added to the number of available units, adds a lot of complexity to the game.

For this reason, we have compiled some of the most important factors of the game to create this list of practical Warlords of Aternum tips and tricks. If you are looking to improve your performance in Warlords of Aternum, then read our hacked tips:

Consider the elements of the battlefield:

Unlike other games, the battlefield in Warlords of Aternum is much more than just an arena for the participating armies to face. In each of these spaces, you can find all types of terrains and objects that give bonuses to troops that are in certain boxes, as well as restricting some skills to those who have the misfortune to step on them.

Each arena in this game is divided into a squad that represents the spaces in which your units (and that of your enemies) can move. However, not all boxes are safe to cross as some of them may contain obstacles that impede the passage, or restrict some skills. Also, some boxes contain some elements that, for a good strategist, can be used to turn the flow of the battle.

Some of the most common elements of the battlefield are forests, which reduce the damage received by units that are stationed in it by 50%. For this reason, these boxes are ideal for those who decide to adopt defensive strategies, as well as to be able to withstand the heavy blows of some bosses while the other units rain destruction on it.

Another important element of the battlefield and that includes most of the offensive strategies are the elevations. If a character hits another unit that is at a lower elevation, it will cause much more damage than normal. For this reason, if you are the attacker, it is always better to look for height before launching any attack. Also, if you do not have the advantage of height, it is recommended that you move away from any elevation so that your enemy is forced to descend to your own height to fight. However, this changes completely when it comes to units of rank since these can launch attacks from distant heights, causing much damage to everyone they reach. In this sense, always seek to mount your magicians and archers on the heights.

Some special lands, other than forests, also include villages, swamps, and cliffs. The former recover the health of the unit that is in it at the beginning of their shift; the seconds prevent the movement and end the turn of anyone trying to cross it, and third parties prevent nearby combat troops from attacking, regardless of whether they are in adjacent cells.

You can get access to the forge early in the game by completing a few levels of the campaign. In this place, you can pay gold to improve your equipment, which will be the best way in which you can improve your characters, especially at the beginning. After improving your equipment, you will see that your characters can dispatch the enemies with one or two hits, which will help you complete those difficult levels.

Use this system of strengths and weaknesses to take down enemy troops efficiently, and get all the crushing victories you want.

Defeat the chiefs in Warlords of Aternum: 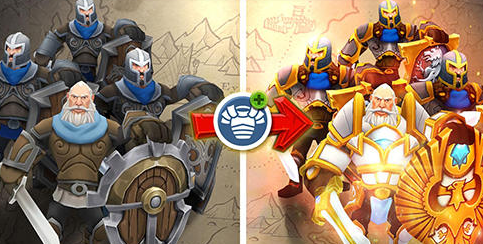 There are many different bosses in the Warlords of Aternum, which are much harder to beat than normal units. However, these give many interesting rewards. For example, the first boss, Grubak, releases his relentless sword by defeating him the first time. This is a very powerful sword that allows you to dispatch an enemy with a few hits, which is very useful at this point of the game. In addition, this boss returns every 5 hours to give you the opportunity to beat him again and receive other rewards. But be careful, every time you confront the bosses, they will be stronger and force you to fight in other conditions such as different arenas, or with a smaller number of regiments.

When you arrive at the War Port, you will be able to face the teams of other players in PvP battles. These battles are not live, but you face teams armed by other players and controlled by the computer. Each time you beat your opponents, you will receive trophies that increase your position in the leadership tables. If you are in a good position for when the season ends, you will receive excellent prizes.

These are some warlords of aternum tips that you can apply in your day to day in Warlords of Aternum to improve your performance in the game. If you are a beginner, we recommend that you focus on improving your equipment in the forge, as well as improving your favorite units. After a while, you can unlock enough units to form complex strategies, and even dominate in PvP.

How to Improve your Units in Warlords of Aternum?

In many occasions, when it comes to games of war and conquest, the union does not make the force. While it is true that as you grow your army you will have better chances of coping with any war, this is not the only way to guarantee your victory; There are more efficient methods to strengthen your army. Specifically, by strengthening your individual troops, you can increase the power of your army without the need to train more troops, and keeping maintenance costs low since you are not forming new units.

This principle applies to all games of war and conquest. In addition, although Warlords of Aternum is not exactly a game of conquest, these principles also apply to him, since, by improving your troops, you can increase your army power, especially when you can not unlock new regiments due to the lack of fragments.

In Warlords of Aternum tips, there are a number of ways in which you can improve your units, including using the forge, accumulating power-ups to learn new skills, and leveling up your regiments. In this guide, we will detail each of these methods so that you can improve your troops quickly and efficiently.

What do I gain by improving my troops?

Depending on the method you use to improve your troops, you will receive different bonuses to your troops. For example, leveling up your regiments will increase each one’s attributes, and may even unlock new abilities. On the other hand, improving the equipment in the forge will increase its defense, attack, and utility, depending on what each unit has equipped. On the other hand, if you have the possibility to expand your available regiments by unlocking new units, you will expand your repertoire of available options to face a wide range of enemies.

Regardless of the method you use to improve your troops, you will receive many advantages to overcome different challenges in the game. However, as you will soon discover some options are better suited to different occasions.

Level up your regiments:

The most direct way to increase the attributes of any unit is to level them up by completing different challenges in the game. Unfortunately, it is difficult to train your troops completing the different levels of the game because, after having released an area of enemy forces, you can not return to complete this level to accumulate experience. In this sense, you will be limited to fights against outlaws, or to complete the worlds exclusively are the units that you wish to train. In this way, you can strengthen only the troops you want, leaving aside those that are not useful.

However, due to how the process of increasing your level in this game works, you probably need to train two different regiment groups. This is because the maximum level of your units is limited by your caudillo’s level. Specifically, none of your regiments can be higher than your caudillo.

Our recommendation is that you try to level up equally to all regiments you unlock, regardless of the use you give. In this way, you can keep the progress of each one under control and synchronized at the level of your leader.

Improve the rarity of your regiments:

In addition to increasing your level, another way to improve your regiments is to increase the rarity of these, which can be achieved by accumulating fragments of the unit you want to improve. However, these fragments are difficult to find since you must unlock several levels, participate in special battles, or even receive them from the free chests that are available from time to time.

By accumulating enough fragments of a regiment, you can access the army menu, and increase the rarity of the regiment, greatly increasing its performance in combat. The only thing that prevents the continuous improvement of your units in this aspect is the time it takes to collect the necessary fragments to increase the rarity of the unit. To remedy this, if you are someone who likes to invest money in a game, you could open the imperial ship’s chests, which cost 1,800 diamonds, but guarantee you 10 fragments or more for the unit you choose.

Invest in the forge:

The forge is one of the means by which you can improve your units tremendously, especially at the beginning.

This building is unlocked early as you advance in history, and allows you to use gold to improve the equipment of all your regiments, increase the damage they do, and even granting some special bonuses such as critical damage, critical hits, or other effects.

A good investment at the beginning of the game is the forge since it gives you a lot of damage and resistance at a point where you can not even level up your regiments, nor do you have access to as many units. In this sense, we recommend that you upgrade the Grubak Relentless Sword as much as you can, as this can do a lot of damage to any enemy, especially when doing critical damage.

We hope these Warlords of Aternum tips and tricks are very helpful to you.